I mean, my blog is moving. I'm still stuck in South Carolina.

I just ... the name I picked for this blog was never very good. I realize that. But since I don't run, it's extra stupid. So, I bought a url based on a name that has been recommended to me by several people. Elliepie.com. Isn't that cute? It's not about pie - that's just how my last name starts. Though I do love pie. And the new name gives me license to blog about food from time to time - especially, I suppose, if I bake a pie.

But yes, if your'e wondering, Roomie does call me Ellie pie.

So, reset your readers, go, subscribe, be merry. (I say to my one or two loyal readers). Add me to your blogroll (and let me know if you do, I'll do the same).

Those of you who also nerd out on blogs (you know who you are) may notice I don't have Intense Debate on the new blog. It's been glitchy from time to time, plus it simply won't work at all with the fancy new dynamic blogs that Blogger's rolled out. So, for now, you can subscribe to comments - but do feel free to bitch and complain and let me know if the notifications don't work.

And, for your reading pleasure, I give you the best moving story ever to grace the internet.

Actual conversation at my house this weekend, while I was doing dishes and Roomie was studying.

He: “You need help with the dishes?”

I continue to wash dishes while he walks in the kitchen, looks in three places, and turns up the lid to the olive oil.

Me: “What would I do without you?”

He: “You’d lose everything.”

Me: “Or I’d just have put a piece of foil on the olive oil and put it back in the pantry.”

Me: “Maybe, if I was feeling fancy, I’d have put a rubber band around the foil.”

*At my house, right now, I do most of the cooking. I also do the majority of the dishes, though Roomie helps. This isn’t because he’s a lazy jerk or sexist (am I the only person who jumps to this conclusion when a woman in a relationship with a man does most cooking and housework?), this is because he teaches two classes (they don’t even create his tests for him, which I think is total B.S.) and has a full time grad student class load +  he’s supposed to be working on coming up with research plans on some hard-to-find little suckers called diamondback terrapins.

Backstory: When I was in college and working, I lived with my boyfriend – a guy I haven’t spoken to in ages. One of the many problems with that relationship was that he thought that, despite the fact that the number of hours I devoted to schoolwork and my job waiting tables at a hamburger and shake shack (any Ducks remember Jamie’s Great Hamburgers?) added up to far more than his 40 hours every week, I should take care of the majority of the housework. Because I made less money than he did.

Right. And since I wasn’t so great at keeping house anyway (I’ve gotten better, but I’m still not stellar. Ask my bathtub.), we lived in total filth. Most people do that in college, right?

Right. I’m not still traumatized by that experience, but it was formative. So the way I look at it, if one person has significantly more time on his/her hands, he or she should do more work around the house.
Posted by Ells (aka Serialmono) at 5:10 PM
I'm not a total slob. Just kinda.
2011-11-08T17:10:00-05:00
Ells (aka Serialmono)
Comments

I always complained about Central Oregon's lack of shoulder seasons. For the five years I lived there, spring and fall for me were just brief blips between winter and summer.

While I did eventually come to appreciate the muted high-desert palette of sage on gray on dust on moss, I never got over missing the intensity of color where I'm from, the wetter side of Oregon. I missed Portland's spring and fall. I've previously written here about the glory of springtime in the south. Flowers explode everywhere - it's an assault of color and fragrance. My yard in the springtime includes flowering bradford pears, dogwoods, wisteria, Carolina jessamine, honeysuckle and gardenias. Every time you turn around, something else is blooming. Honestly, even Portland and the Willamette Valley is muted in comparison with the south; for the most part, it's just a place where green congregates; forest on kelly on fern on envy on chartreuse.

The hiccup of autumn in Central Oregon was never anything to look forward to. After the glory of blue-skyed summers and their clear mountain lakes, summers of blessed, blessed dry heat, I wanted none of it. All fall did was remind you that winter was coming for you. October's frigid mornings and gray skies were winter's way of saying, "Get your ice scraper ready bitch. I'm coming for you."

Contrast that with the relief I feel now that summer is over. It's physical. Goosebumps with each turning leaf. When I pulled my first sweater out of its summer storage (I'd never lived in a place where you actually store your sweaters all summer. In Oregon, you face at least a handful of chilly days and evenings even in August.) we cried and hugged like old friends reuniting at an airport - I swear I heard violins playing in the distance. I don't even want to admit what I did when I wore boots for the first time this fall - it's simply indecent.

One thing about fall in South Carolina that's strange for me, that feels wrong for the season at hand, is that I'm opening up the house for the first time in months. Doors and windows, everything's open. No more mornings where you open the door to go outside and the air is hot and moist, like dog breath. After a long summer of sprinting from one air conditioned space to another, of keeping shades drawn against the heat, I've been throwing open all the doors and windows, letting a breeze blow through the house for the first time in months. It feels like spring.

So I did some spring cleaning. Starting with brushing the dogs.

Yeah, so that happened. 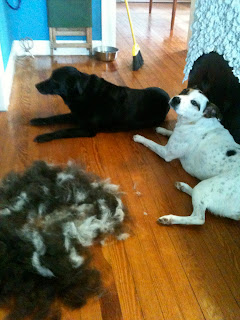 Ells (aka Serialmono)
Take one girl, born and bred in Oregon.

Sprinkle in some smelly dogs, add a southern boy, pack up a trailer and ship them all off to South Carolina.

Here's where (instead of writing about running, as I'd originally planned) I write about moving from the Pacific Northwest to the Deep South.

I'm totally scared of bugs and humidity, but I love me some hush puppies.